Register for Together We Thrive! 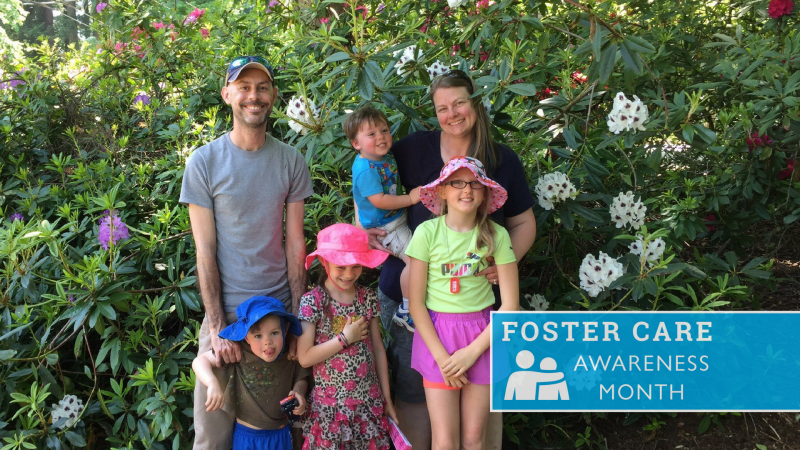 Katie Biron is a mom many times over. She is the adopted mom of two children; she is the biological mom of two children; and she is a licensed foster mom who has had a hand in parenting nine children over the years. Katie doesn’t hold the title “mom” in the way some folks think of it – as an exclusive title. Instead, she sees herself as an essential part of her children’s support network that notably includes another person her two adopted children also know as mom.

Her 3-year-old son, Grayson is clear on and proud of his mom situation: “Do you know I have two moms? It’s so cool that I have two moms,” he sometimes reminds Katie. “Laura’s my mom – yeah, I grew in her tummy. But then you’re my mom too.” With pride Katie says, “He’s my son, he’s Laura’s son, Laura is like my little sister now.”

But it wasn’t always that way.

In 2006, when Katie and her husband Jonathan first came to Amara, they were set on adoption and were uninterested in foster care*. They were still required to open a foster license but they would only consider infant adoption so their house sat empty as they waited. Katie now talks about that time with sadness and regret. “We were really narrow-minded about what the right child looked like for our family,”  she remembers.

Eventually, they found an infant to adopt and it was through this adoption (of their oldest daughter, Emma) that things started to change for Katie and Jonathan. When they first brought Emma home, Katie was very protective of her role. “People would say ‘Emma’s mom’ and I would say, ‘Oh, no no no. You mean birth mom,’” she remembers. “I spent a lot of time feeling like I had to defend who I was in Emma’s life.”

Though the Birons intended an open adoption from the beginning, they felt a lot of hesitancy – particularly when Emma’s birth mom, Amy, didn’t respond to their letters or pictures. The Birons heard very little from Amy the first 6 years of Emma’s life. During that long absence, they were very tempted to stop writing, stop sending pictures, stop trying to connect.

But, as they learned through their training at Amara, Katie and Jonathan chose to keep reaching out and eventually Amy reentered their lives and they began to build a relationship. It was not easy at first – especially when spending time together required traveling to Ohio. But over time, Emma’s adopted family and biological family began to know each other and formed a strong bond. “Amy has continued to do really, really well,” Katie beams.  “She’s a big part of my life now – I think I’ve been out 3 more times to see her with Emma.”

A Shift Toward Fostering

As the Birons got to know Amy and develop compassion and sympathy for parents whose children have been removed, they felt compelled to open their home to children in foster care – in part to make up for the 18 months before adopting Emma when they held an active foster license and fostered no children. At this point, the Birons had welcomed two biological children into their home, for three kids total: Emma, 7 years old; Charlotte, 4 years old; and Andrew, 18 months. Their youngest son Andrew had significant medical challenges, so Katie quit her job (as a pediatric nurse) to stay home and care for him and the other children.

“Now is the time to get licensed!” Katie laughs a bit sarcastically, remembering those busy days with three young children. “We’re going to do medically fragile foster kids who are going to go home. That’s our jam!” The Birons told state licensers, who were looking for kids to come to their home: “Give us the kids who look like they’re gonna reunify; we love working with birth parents, we don’t plan to adopt, we don’t want to adopt.”

Five days after receiving their license, they were placed with a 2-month-old little boy, Grayson, who was 16 months younger than Andrew. Katie was committed to fully supporting his mom, Laura, in reunification. Katie went far above and beyond expectations. Initially there were complications setting up visits so, at the state’s request, Katie coordinated the details of visits with Grayson’s Uncle Rob to ensure Laura and Grayson were visiting regularly. Their first meeting felt strange and awkward for Katie but “it was the start of a really great relationship,” she notes fondly. With Uncle Rob’s help, Katie was able to arrange it so Laura could be with Grayson on Christmas and see him on his 1st birthday: “We met at the mall and I brought cupcakes so she could see her baby blow out his candles on his first birthday.”

Essentially, the Biron’s welcomed Grayson and his family into their family. “It just morphed into this huge family,” Katie says. Uncle Rob, for example is now so much a part of the family that all the Biron kids see him as their uncle. “My kids don’t realize that Uncle Rob is anything but Uncle Rob…[even though] he’s only biologically related to Grayson.”

An Expansive Definition of Family

This expansive model of family, where the Birons were primary caregivers but Laura and her family were very much involved, felt so natural and wonderful that Katie was surprised when Laura asked her and Jonathan to officially adopt Grayson. “We had thought we were on reunification [so] it took a shift,” she recalls. “We loved this little boy so much but Laura had always been his mom to us and now she is asking us to be his parents.”

It took some time but eventually the Birons adopted Grayson and they still maintain a very close relationship with his biological family. “They live close, so we get to see them a lot…[Laura] spends every holiday with us. We have a very broad, open adoption agreement.” For example, most open adoption agreements include a clause that if there is no response from birth parent in 12 months, the adoption agreement is void and the adoption becomes a closed adoption. Katie removed this from their agreement with Laura, primarily because of her experience with Emma’s birth mom, Amy.

“It took Amy 6 years to be where she felt like she could be part of our lives…and Emma has gained so much [from that relationship]. But if I had closed that at 12 months, Emma would not know her siblings, she would not know her brother, her Nana – who was this awesome matriarch who lived to be over 100.”

Reflecting on how much her attitude toward foster care, adoption, and parents whose children have been removed has changed over the last 12 years, Katie is regretful and wishes someone had been there to help her navigate building relationships with the biological families of her adopted children and the children she cared for in foster care. She notes that current training for foster parents does a good job of explaining why building relationships with biological family is important but there is not enough guidance about how. “I guess I’m going to have to teach people how,” Katie decided. “So they can see that it’s not so scary.” A few months ago, Katie joined with another foster parent to create Kaleidoscope Parenting to guide foster parents in connecting, building, and maintaining relationships with biological family of the kids in their care.

“Let’s figure out how to connect with birth families. You can’t come in here hoping someone fails. You can walk alongside them,” Katie reflects. “And it may end up looking really different – like Grayson’s case looked really different in the end than I thought it was going to look like. But what does happen when people build connections is we were all able to get out of our corners and make the best decision for this little boy.”

Amara is proud to work with Katie and to share her story of building strong, expansive families with biological, adopted, and foster families! Thank you, Katie, for your commitment to kids!

* At this time, Amara still worked in domestic infant adoption; that program has since closed as we are focused now on the wellbeing of children entering, experiencing, and transitioning out of foster care.