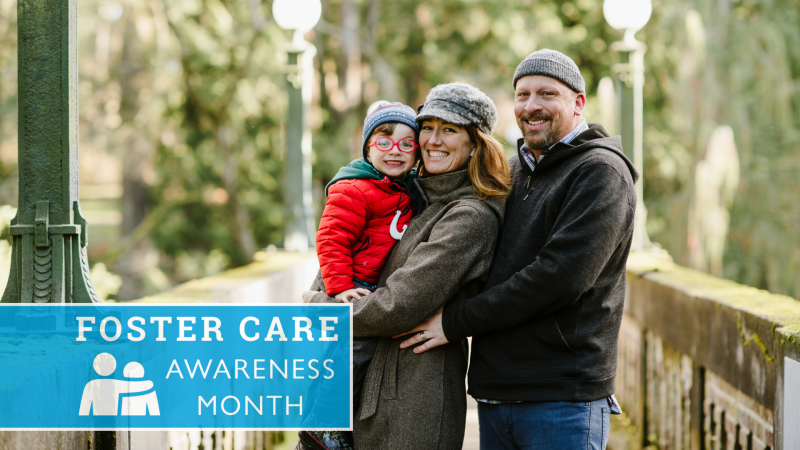 Nolan Davidson is a force of nature. Vibrant, lively, and quirky – his personality

is infectious and much bigger than you’d think would fit in a 4-year-old body. Nolan is 150% in the game, all the time; he approaches life as though he’s walking into a room, looking around with expectant energy and asking, “What’s next?!”

Nolan, his mom Ashley, and his dad Jason became a family through foster care at Amara. The Davidsons came to Amara because they appreciated Amara was a local, non-profit agency with a long history of advocating for children. They also liked the idea of the support and training Amara offers for foster families which struck them as the perfect way to ensure kiddos placed in foster care are with families who are well-informed and committed to the child’s well-being.

That training and support would prove essential to the Davidson’s ability to navigate the foster care system and build open relationships with Nolan’s birth family; enabling them to tackle complicated and uncomfortable situations while keeping Nolan’s best interests at the center, rather than their own feelings.

Just One Day At A Time

There is a great deal of uncertainty when parenting children in foster care. The Davidsons were always hoping to adopt but knew that the #1 goal of foster care is reunification – meaning the child returns to live with their birth family. Of course, sometimes children in foster care cannot return home and, in that case, foster parents are offered the chance to adopt. Yet this outcome is not guaranteed, and it can be emotionally challenging for foster parents to live with uncertainty while caring for a child they grow to love deeply.

For Ashley and Jason, they managed this uncertainty by intentionally remaining in the moment, instead of living in the future. This was not always easy. Unlike other parents they knew with kids the same age, they weren’t guaranteed future activities like his first day of kindergarten, recurring holidays with extended family or a vacation to Disneyland the following year. They weren’t discussing saving money for college like their friends. And it was sometimes difficult emotionally: Ashley realized early on that she couldn’t sing “You are my Sunshine” to Nolan because the line at the end, “please don’t take my sunshine away” just hit too close to home.

To manage these challenges, Jason and Ashley chose to think of fostering as providing support and stability for Nolan every day and just one day at a time. Their mantra was “to love him as much as we can, for as long as we can, because he needs it.”

The Davidsons were able to meet with Nolan’s birth family right from the beginning. Jason says they could never have broken the ice with Nolan’s Aunt and Grandma without the support of their Amara social worker, Kristina. At first Nolan’s birth mother was not able to meet much or do many visits, but is Aunt and Grandmother were very involved, and the Davidsons began forming a relationship with them quickly.

This open relationship has proven to be beneficial for everyone. While sometimes awkward, the Davidsons could tell it was a relief for Nolan’s family to meet them and get to know them. “They could tell we loved him and were taking good care of him,” says Ashley. Ultimately, they believe, it was this trusting relationship that led to Nolan’s being adopted.

After about 19 months of caring for Nolan as his foster parents, Ashley, Jason, Nolan, and Nolan’s maternal grandmother all attended court together where Nolan was officially adopted into the Davidson’s family.

A Constellation of Familiy

Even after Nolan’s adoption, the Davidsons continue to see themselves as part of a constellation of family surrounding Nolan, recognizing the important role Nolan’s birth family plays in his life, even if they aren’t in constant contact. As Jason notes, “all family relationships wax and wane” but the Davidsons believe in keeping the lines of communication open. They know that as Nolan gets older his birth family will be important to him in different ways and at different times.

For example, Nolan’s birth mother has made major strides in changing and improving her living situation and health and is now raising Nolan’s half-brother in a safe and stable environment. Ashley and Jason talk about her success with pride and are looking forward to the right time to introduce Nolan to his brother.

They are carefully choosing how and when to do so – and they aren’t making that choice on their own. Keeping in mind Nolan’s developmental stage, and both birth and adoptive parents’ readiness, Ashley, Jason, and Nolan’s birth family are working together to determine the best timing and approach for the boys to meet. Still, they expect to introduce them this year. Says Jason, “We’re navigating it together.”