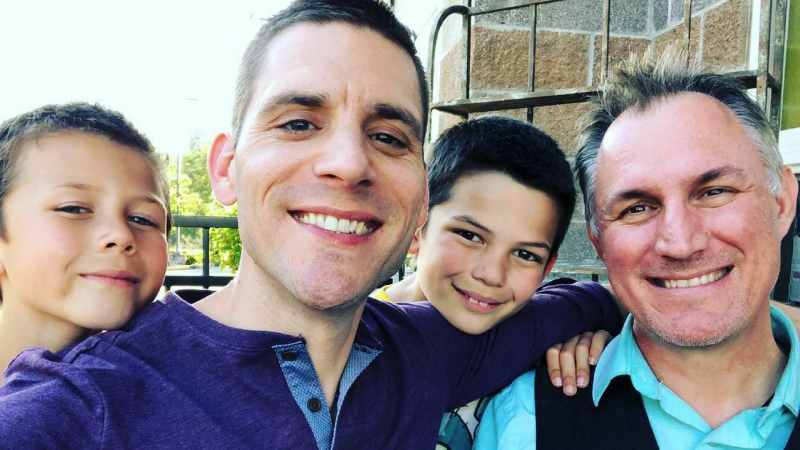 Matthew and Scott Ramsey created their family through fostering and adoption – and they want to ensure all families are given the same opportunity. We’re honored to share their story for Pride Month 2018!

It’s a common story: two people meet, fall in love and want to create a family together. Of course, for couples who do not fit the heterosexual, cis-gender mold, creating a family can come with hurdles and challenges.

This issue is very close to Matthew Ramsey’s heart both through his work at Family Equality Council as well as his own story creating a family through foster care and adoption with his husband, Scott. Becoming a foster parent offers individuals and couples who have love to give the chance to provide a home for a child (or for siblings) and truly be there for those children, for as long or as short as the children need.

When Matthew and Scott started dating, they both knew they had a lot of love to provide to a child or children. The desire to become parents one day was a key part of their compatibility and a foundational element of their blossoming relationship. They were not in a hurry, though, and they were also aware that in Columbus, Ohio (where they were living) they could not legally get married or adopt children together.

Matthew and Scott decided to move to Seattle in part so they could build a family without the legal barriers in Ohio at the time. “We wanted to live in a more progressive area…we wanted to be in a really liberal place and we knew the laws in Washington state were better than the laws in Ohio.” So in 2011, they moved to Seattle where they discovered Amara and learned more about children in foster care who need loving homes.

Becoming a parent is challenging no matter how one builds a family and the Ramseys were no exception! Matthew recalls with laughter those first months with their boys: “We did avoid the sleepless nights of infancy because they were 3 and 4. But still, 3 and 4-year-old energetic boys for first time parents…it was no joke!” After fostering the boys for almost two years, they were officially adopted in October of 2015 and the Ramsey family was officially four!

Still, compared to many families, the Ramsey’s fostering process – and ultimately adoption – was relatively smooth, simple and easy.

An important part of that process for Matthew was realizing the relative ease they experienced fostering and adopting was partially the result of his privilege as a white man. “One of the first times I realized my privilege was during one of the transracial adoption classes at Amara.” Matthew noted that, though he had experienced bullying and discrimination throughout his life, it was eye-opening to learn that the deep roots of racism in this country still privilege his whiteness and provide opportunities for him not available to others. “Yes I am a gay man, but I am also white. I’m a white man. I’m also cis-gender. And, we’re not rich, but we have enough money. All things considered, I’m very privileged.”

This realization caused Matthew to more carefully consider what forming a family is like for those whose identities are more marginalized than his: trans/non-binary people, those living in poverty, those in isolated and rural areas without resources and support networks, and/or those living in places with discriminatory laws and policies. Matthew’s passion to help enable and empower families of all types, led him to his position as the Chief Development Officer at Family Equality Council, where he works every day to advance legal and lived equality for LGBTQ families and for those who wish to form them.

“One of the reasons I’m passionate about my work is that my husband and I, because we are white, cis-gender, gay men who live in a progressive area and who have a level of affluence…[forming a family] was not a difficult process for us. But there are lots of families – LGBTQ families in particular – around the country in other geographic areas who may not have the same socio-economic abilities or might be of a different race or might be trans or whatever the case may be, they are not having the same success in forming their families.”

Amara is proud to have been able to find the right family for Matthew and Scott’s boys, a family that may not have existed in a different place or the not-so-distant past. And we proudly support Matthew’s work at Family Equality Council to protect the rights of LGBTQ families as well as LGBTQ children and youth in foster care. Together we can truly ensure that every child in foster care has the love and support of a committed family for as long as each child needs.