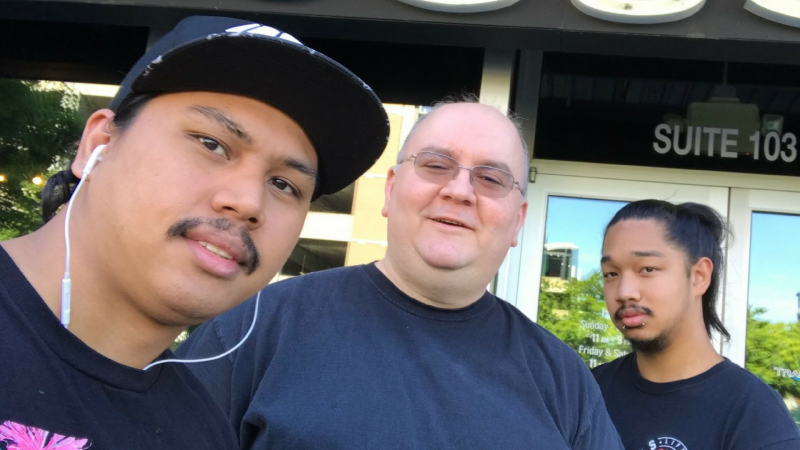 As a single man, Wanderley Chesim wondered if he would be accepted as a foster parent. Now Wanderley’s family has grown to include 5 young men and he’s become convinced that all types of families are needed for kids and youth in foster care. He reflects here about his journey of foster parenting.

Wanting to Do More

At some point in my life I was hit with what you could call a mid-life crisis. I was 44 years old (older than my dad ever got, as he died at that age), I had a good, stable, high paying job with my mortgage and cars fully paid. At this point I would start thinking about getting a Porsche or traveling the world. But I felt that those things wouldn’t satisfy me. I decided I needed to do something meaningful and share the blessings I received.

The decision to become a foster parent was a process that started with donating some of my money on a regular basis and then deciding to volunteer at a young adult homeless shelter in Redmond (Friends of Youth’s The Landing). I read a lot, and I started studying the issues faced by homeless youth and what lands them in the tough situations they find themselves in at such a young age.

I became very aware that many youth in the shelter I was volunteering at had been in foster care. I helped at the shelter once or twice a week, at dinner time and helping youth get settled for sleep. And every night when I went home, I was keenly aware that I had an empty bedroom. That started to bother me.

I think for me that was the moment I decided to become a foster parent – to put that bedroom (and my free time and money) to a better use than just serving dinner at the shelter. I wanted to do more.

Getting Started with Foster Care

I think the most difficult hurdle getting started with foster care was the internal struggle. Being single and “old” I was very aware that everyone would be judging my motivations and abilities. I had to just decide to pay the price and let people inspect me under a microscope and see that my intentions were good, my morals were strong, and my behaviors were beyond reproach, even if I had little experience.

My surprise was the reaction of family and friends. I wasn’t able to predict their reactions – even people who had been in my life for many years. Some were very supportive, and continued walking with me, always trying to be helpful. Others still think I made a mistake (the most painful is my sister, who never misses an opportunity to voice her displeasure that “those kids” are still in my home, “taking advantage” of me).

In becoming a foster parent, there were two very important questions I needed to ask myself: Do I have the skills to do this? Never having been a parent before, that was an important question. Will I endure? It’s one thing to mean well and be prepared, but do I have the stamina and the steadiness to survive the hard times and long stretches of parenting as a single parent while working full time?

I was already over 40, and unsure about my long term prospects, so I decided that teenagers would be a better fit for my home than taking little kids (a “shorter tour of duty”, if you will). All the kids in my life (nephews, godsons, etc) were already teenagers at this point, so it just felt natural to take in teens. Also, teenagers are the most difficult to place, with so many families opening their homes to younger kids. And my hope was that I would be able to have an impact, before they aged out, and help steer them to better outcomes than homelessness.

And then I became a foster parent.

At 9 PM on a warm night in May 2015, my first foster son was dropped off by his social worker, on his 18th birthday. The young man was clearly uncomfortable, and hesitant, and the whole situation was surreal. Once the social worker left, we sat down and I put some candles on a cheesecake – I didn’t have time to plan and our local supermarket didn’t have any birthday cakes left. I gave him a book as a gift. It was a lame birthday party and the fact that this young man was celebrating his 18th birthday with a complete stranger still brings tears rolling down my face.

And now these two complete strangers were going to start sharing a home. It was a weird feeling.

The next day was better, and the boy went to school. After school, we met at a Starbucks near my workplace in downtown Seattle. I saw him walking down the street with another boy. It was his younger brother (then 14), who was also in foster care, but still in a shelter. After a few days of those meetings at Starbucks, I asked their social worker if I could pick up the younger brother in the shelter and bring him home for the weekend so they could be together. She said yes, and we did that for a couple more weeks. Then their lawyer asked if I would also be willing to foster the younger brother. I said yes and suddenly two sons were in my home!

In My Heart, He is My Son

It was all supposed to be temporary, but two weeks turned into two months, and then I told the social worker to stop looking. My sons had found a home already.

The older brother stayed for two years then moved to a college dorm. We still talk regularly (he calls me “dad”) and he comes by every week. The younger brother is still at my home. He didn’t want to be adopted but accepted to have me as his guardian. I will offer to adopt him again in a few months when he turns 18. Whether he says yes or no, it’s nearly irrelevant. In my heart, he is my son, and I won’t be kicking him out when the custody papers expire on his 18th birthday.

In addition to these two brothers, there are 3 other teen boys in my care. They are not easy, with different behaviors and personalities. But given that they don’t share bedrooms, peace reigns in the house most of the time, and life is good (most of the time).

One of my big hesitations with fostering was whether I would be a worthy foster parent. Single, working full time, and not young, I wondered what the upside was of having me as a foster dad. Would I actually be beneficial to foster kids? I thought the licensers would say, “No, thanks. you’re not the kind of family we’re looking for.”

But the reality is that there are way too many kids in foster care and, even though I was not the best match for many of those kids, it turns out that my home, with a very simple “family of one”, was a much simpler environment for some foster youth to navigate. They could bond with me without feeling they were betraying their mom, for example. And if they don’t have to deal with a “mom and dad” situation, they save some energy and time they can use in figuring out other aspects of life.

So even though I was initially unsure about whether I bring enough value to the table, I ended up realizing that not only is someone in my position relevant, but very desirable for some kids. And more people like me would be really good for more kids. There are many kids out there that would do really well with “just a dad” (or “just a mom”). We should be a diverse bunch, to welcome into our homes a diverse group of youth, of all kinds and from all places.

Be That Steady Rock

Fostering has created some very powerful moments that will always stay with me. Like the first time my foster son woke me up at 2 AM so I could sit with him while he “raps”. I still have the recording of him basically telling me his life story via a rap song that he wrote. The significance of that moment still hits me. That was the day he accepted me as family (even if he doesn’t call me dad – and maybe never will).

I will always remember the first time a teen boy broke down in tears and spilled his soul on my shoulder, about all the hurts he was dealing with. It wasn’t a happy moment, but it was clear that moments like that are why I was there.

Teenagers will ignore you, distance themselves from you, and be quite happy living their lives away from your prying eyes. But your job is to be there when they can’t handle it. When they need a shoulder. When they need protection. When they need to trust. When they break down. And at that moment, you feel that you couldn’t have been anywhere else. That your place in this world and your reason to be alive is to be there and be that steady rock, that island of stability that they need to land softly from their mistakes, from the mistakes of their families, and from the harshness of being in foster care.