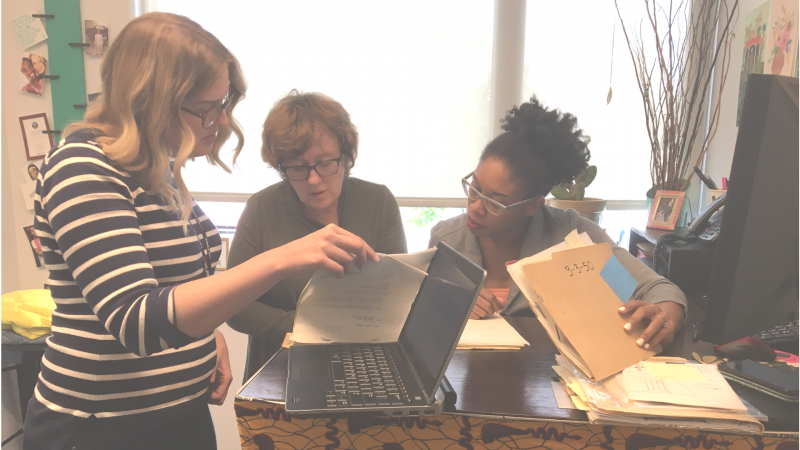 By Angela Tucker, Director of Post-Adoption

At Amara, we know adoption has lifelong implications. As the Director of Post-Adoption, I am tasked with supporting individuals as they navigate the complexities of their adoption stories whether they are young children or 95 years old. For most of the 20th century best practices included closed adoptions, which meant ensuring no contact between birthparents and the adoptive family after an adoption takes place. Nowadays, we recognize the importance of transparency and the benefits of a child knowing about their birth family and ideally being in each other’s lives.

Upon beginning my tenure at Amara I found a large number of neglected files full of search and reunion requests from adoptees and birth families. While disheartening, this problem is not rare – especially for child welfare organizations with a long history. Typical staff turnover and 900 finalized adoptions in the almost 100 years of Amara’s history have resulted in some files being overlooked. And though this may be common, we consider it to be unacceptable. So, in March 2018, we launched Project Search & Reunion. The goal of this project is to audit 3,100 of our own adoption files between the years of 1950 and 2000 to ensure that adoptees and birth families receive the information and support they requested, especially in regard to searching.

This project is unprecedented, as far as we are aware. We are pushing back against the status quo for adoptees and their families in terms of what information they’ve been “allowed” to see and share. We hope this project helps fuel a change in the way adoptions are addressed in the United States. Adoption files often sit dormant behind locked doors as Sealed Records laws prevent adoptees from seeing their own file. However, we firmly believe that all individuals have a fundamental right to access information about their biological origins. And we are committed to providing as much access to Amara adoptees as we can legally provide.

We are already learning quite a bit about adoption practices from the past. For example, we learned that in the 1950s, we conducted IQ tests on children as young as 8-months old to determine if they’d be a good match for an adoptive family. We have read about the women who were “sent away” to be housed in Florence Crittenton Homes to hide their pregnancies from their community. And we have seen, in our own files, instances where adoptees were not told that they are of Native American ancestry. Each of these revelations is alarming.

Sandra* was one of the first people Amara reached out to as part of Project Search and Reunion. Amara called Sandra in March 2018 to share that her birth mother had requested to meet her in 2004, but that, unfortunately, we had not shared this information with her at that time. We also shared that her birth mother has since passed away. To my surprise, Sandra was quite understanding, stating; “I don’t think I would’ve been able to follow through with meeting my birthmother at that time because I love my [adoptive] parents too much and this would’ve hurt them.” We are supporting Sandra as she grapples with the nuanced feelings of guilt about wanting to uncover her personal story while not wanting to “betray” her adoptive parents. This is a common dilemma for adopted people who grew up in an era where secrecy in adoption was prevalent.

Through beginning to share about Project Search and Reunion, the response has been astounding. One individual who was adopted through Amara wrote to us stating:

“…about 14 years ago, I contacted Medina (Amara) and received a letter with non-identifying information** from my file, however, I am so excited at the potential for more info. My biggest over the top wish? A picture of me as a newborn. Second biggest wish – names of the people who cared for me the two weeks from birth to placement. #nomoresecrets #adoption #myadoptedheart #adoptionhealing #itsmybirthright”

We are honored and privileged to conduct this momentous work. We are unsure of our timeline, and can only surmise what lies within those files, but we are committed to full transparency. Righting our organization’s historical wrongs is a humbling process, and we hope this offers a blueprint for the future of openness and access to adoptee records!

*Names have been changed for confidentiality.