Born and Adopted in the 1950s: What We're Learning from Project Search & Reunion - Amara 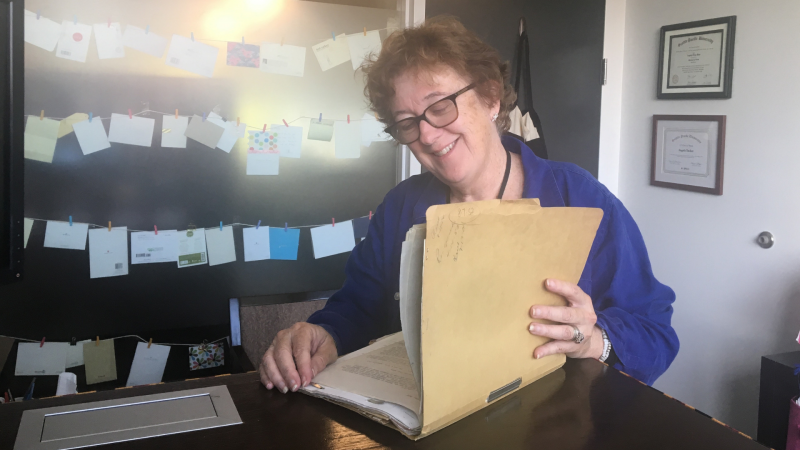 Amara’s Post-Adoption program has created an important new initiative: Project Search and Reunion. Under the leadership of our Director of Post-Adoption, Angela Tucker, we are looking through literally thousands of files to ensure that adoptees and birth parents receive the information and support they wanted, especially in regard to searching for their biological family members.

My name is Maureen McCauley and I’m the Post-Adoption Lead File Analyst at Amara. I am also an adoptive parent and worked professionally in adoption for over 15 years. Since March, I have been reviewing files from the 1950s, a decade that saw a booming post-war economy, concerns about the Cold War, migration to suburbs, and the burgeoning of the civil rights movement – plus rock and roll, poodle skirts, and bobby sox!

Did you know that during the 1950s, unmarried, pregnant women mostly “went away,” often to Florence Crittenton Homes where they were required to place their children for adoption, returning to their hometowns only after their babies were born and placed with adoptive parents? Their pregnancies were often kept secret from their families and friends. Adoption documents typically summed up the reason for placement like this: “The birth mother is unmarried and cannot provide a home for the child.”

Florence Crittenton Homes were originally established in 1883 in New York and were built in almost every state across the country. Here in the Seattle area, the Crittenton Home opened in 1899 and closed in 1973.

Between 1950 and 1959, Amara placed just over 800 children in adoptive homes. Those babies adopted in the 1950s are now generally in their 60s. They were adopted in an era of secrecy with the understanding that their adoption records would remain sealed. In practice, though, many adoptees want to know their stories, their backgrounds, and their truths – regardless of how happy they were in their adoptive families.

In fact, our analysis so far shows that over 60 percent of adoptees placed in the 1950s have contacted Amara. Some want only to know the exact time of their birth. Some want medical information – and sometimes desperately need it. Many contact Amara initially for non-identifying information and then, a year or more later, contact Amara for more information or to search for their birth family.

I have now gone through hundreds of 1950s’ files. The files are usually thin and filled with onionskin paper that often has single-spaced typing on both sides. There are usually many pages about the adoptive parents—summaries of interviews, descriptions of the couple’s home, details about their family histories. At that time, adoptive parents were generally required to prove a diagnosis of infertility, confirmed by a doctor, to be eligible to adopt.

An important consideration during the 1950s was the physical appearance of the adoptive parents. At that time, adoption practice emphasized matching in terms of appearance, from the darkness or lightness of skin complexion all the way to hair color, eye color, height, and weight. The rationale was that, while the child should be told he or she was adopted, the child’s appearance should not be so different from the parents that adoptive status would be known by others just because of physical characteristics. The most popular request was for a blond, blue-eyed girl: remember that this was the era of Shirley Temple. Many prospective parents wanted a boy first and then a girl.

In addition to matching appearance, another element of adoption practice in the 1950s was IQ testing. Babies and children were examined by psychologists to match them intellectually with adoptive parents. Almost every file includes the results of psychological tests such as the Stanford-Binet Scale and the Gesell Developmental Summaries. The intent was to make sure a child would be placed with adoptive parents who could best develop above-average abilities, or who would not be too underachieving for the adoptive parents. Parents who wanted a child to complete college, for example, would not likely have a child placed with them who had tested as below average. Sometimes, though not often, the birth mother was tested as well.

In any case, the 1950s’ adoption files rarely have any medical history on birth parents and even less regarding mental illnesses or similar histories. Indeed, info on birth mothers, in general, tends to be brief and info about birth fathers, even briefer. In the 1950s, women giving their babies up for adoption were, apparently, under no constraints to identify the father. Often they did, but it also was not unusual for a birth mom to refuse to identify the father, even if she knew him, and that decision was respected by social workers at the time.

That policy, of course, has unintended consequences for adoptees when they search for their birth families. There is often no way for adult adoptees to learn who their fathers are. DNA testing alters that to some extent, but I’d guess it could be a frustrating reality for many adoptees that, in the 1950s, social workers felt no pressure to include information about the father in the records.

The 1950s’ files frequently have photos of the adoptive parents. I have yet to come across one that has photos of the birth mother or father and only occasionally of the baby or child at the time of the adoption or even after being adopted. Given these practices, when adoptees born in the 1950s search for their birth families, there is a wide range of information that may or may not be available to them.

Project Search and Reunion is now moving into files from the 1960s and 1970s. We look forward to seeing how we can continue to serve in respectful, transparent, and genuinely helpful ways.