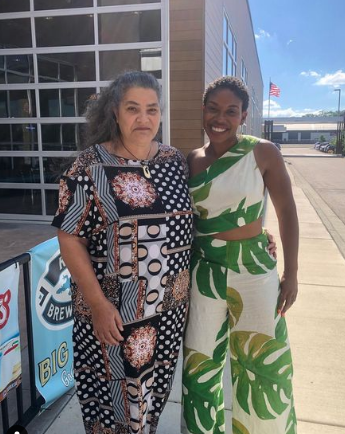 “Mountains, moons, stars…they’re part of our DNA,” says Jenni Tupu, a Fulbright Scholar, Doctoral Candidate, Adoptee and Adoptive Parent who is working and volunteering at Amara as part of her field research on the impacts of adoption.

“Adoption has shaped much of my life,” she explains. As a young child, she was adopted in a closed adoption that was common practice in New Zealand prior to 1985 where many Māori children were removed from their families and culture with no information allowed to be shared about their birth families. And as an adult, she is parenting five grandchildren.

“Māori are very spiritual,” she says. Being separated from her family, culture, and land was traumatic. Her search for her identity and her cultural heritage are part of her healing. She hopes to help other Māori as well, with her research on adoption, identity development, and the challenges native communities face when children have been adopted and raised apart and away from their cultures. In New Zealand, approximately one in every three people have been touched by adoption in some way.

At Amara, Jenni is sharing her research-based insights with our post-adoption programs, and she serves on the volunteer ethics committee for The Adoption Files Initiative (TAFI) which is reviewing decades of old adoption files from years ago when our organization was an adoption agency. It was this ground-breaking program that first drew her to Amara and to the founder of TAFI, Angela Tucker. Angela then helped to connect her Fulbright placement with Amara for research with TAFI and to collaborate on transracial adoptions. Additionally, Jenni has worked with Amara teams serving kinship families and shared parenting programs.

“It has been such a privilege having Jenni guide us through the many nuances that each adoption file holds. Her knowledge well help form the work we hope to do with kinship families” says Rena Konomis, Post-Adoption Program Manager at Amara.

Jenni travels next to Hawaii to continue her research on the impacts of adoption on native cultures. After that it will be time to head home to New Zealand. She is the adoptive mother of one of her grandchildren and is raising four other grandchildren and misses them dearly. “It’s been the opportunity of a lifetime,” she says about the scholarship and the field research opportunities it has allowed her to pursue. “And it gives my children the view that anything is possible.”